The mix of winners and losers at this year’s Sochi Winter Olympics may have been unpredictable, but one thing was for certain; keeping the relevant competition areas adequately snow-covered for the entire event duration was critical to the Games’ viability and success. Sufficient natural snow could not be guaranteed, so it had to be complemented on demand by snow from an alternative, man-made source. 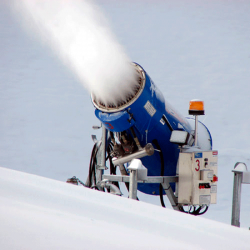 Eight of WEG’s 22kW motors formed a crucial part of the solution; they were located within a pair of large Evapco AT Cooling Towers assembled besides a centrally-located pumping station. The feed pipes radiated from the building to competition areas requiring snow cover, where they terminated in tubing areas which were the supply points for mobile snow cannons. In this application the cooling towers were not running 24/7, but they had to respond quickly on demand. They generated chilled water which, after supplemental conditioning, was supplied to the snow cannon. When this conditioned water left the cannon in a sufficiently cold atmosphere, it turned to snow.
The cooling towers at Sochi had to be subjected to standby temperatures of -20˚C while others in the Middle East may experience temperatures of +50˚C. Conditions within the towers were even more challenging with temperature extremes and relative humidity levels of 100% exacerbating the corrosive environment. In the AT range, long-lasting corrosion protection was guaranteed with heavy gauge mill hot-dip galvanized steel zinc casing. The galvanized steel construction withstands the most difficult environmental and operating conditions.
Evapco selected WEG motors to drive their cooling tower fans. With anti-corrosion coating and environmentally protected enclosures, WEG’s motors had to comply with Evapco’s cooling tower specification for motors, as well as being Russian state standard GOST certified.